"The Cheng Went Down To One Main"

The Cheng Went Down To One Main

(Sung to “The Devil Went Down To Georgia) 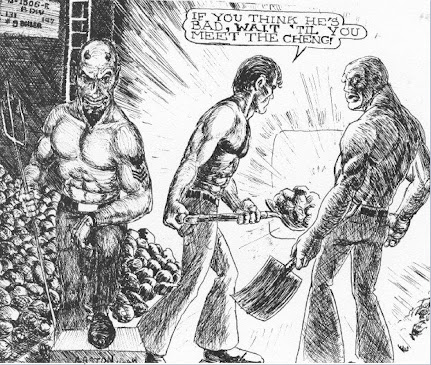 The Cheng went down to One Main

He was looking for a top watch to bust

He was in a bind ‘cause he was way behind,

Engineering had bit the dust

The Cheng jumped up on a main feed pump and said

“Boy let me tell you what!”

I guess you didn’t know it but I’m a Main Space steamer too.”

“Now you steam a pretty good boiler boy, but give the Cheng his due.”

“I’ll bet a boiler full of Gold, against your soul, I can steam it better than you.”

“But I’ll take your bet, and your gonna regret,”

“Cause I’m the best there’s ever been.”

The Cheng jumped down off the pump and said, “I’ll start this show!”

He opened valves, cracked the drains, Till you could feel the hot steam flow.

He brought it up on the Governor and it made an evil hiss,

Babbit poured out the packing glands, as he blew that pump to piss!

Then he looked at his gauge glass, it was high and out of sight,

Snipes poured out the trunk of that pit, with the worst of main steam fright.

He tried to shut the boiler stops, and bring it off the main,

But blades flew from the main turbines, like little drops of rain.

When the hissing stopped, and the steam cleared, the Cheng wiped his pants,

Johnny said, “Lets go down to number four and let me take my chance.”

Johnny lit off the feed pump and got his water right,

And grabbed onto the light-off torch, and gave that bitch a light.

He drew a perfect vacuum, without the slightest strain,

A mere five minutes later, he brought it on the main.

He cracked the main throttle and let those turbines roll,

Only the sounds of steaming bliss were heard throughout the hole.

He maxed out the boiler, and watched the fires burn,

He swing the throttle open and pulled two-hundred turns.

The Cheng bowed his head in shame, he knew that he’d been beat,

And offered Johnny his earned place, the cushy EOOW seat.

Johnny said, “Cheng just come on back if you ever want to try again.”

“I told you once you son-of-a-bitch, I’m the best there’s ever been.”

Johnny oil up you torch, and steam that boiler hard,

Cause Hell’s broke loose in One Main and the Cheng holds all the cards.

And if you win you get that shiny boiler made of gold,

But if you lose the Cheng will get your Crow!